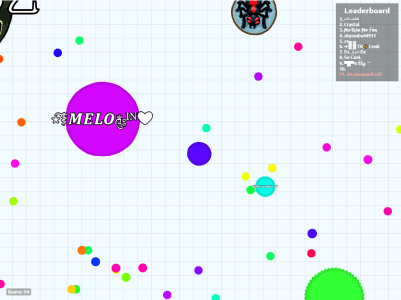 Agario is a two-dimensional mass game in which at the same time a huge number of people can participate. Your hero is a circle that you control with the mouse and keyboard.

Moving around the playing field, you eat nutritious granules and colored balls of other gamers. That is, you become bigger and bigger by destroying others. In fact, your color circle is a bacterium that lives in a world of microorganisms. It was Agario that became the "progenitor" for the later game Slizario, and it is not surprising that the plots and goals in them are very similar. Showing interest in other bacteria is a sure sign that you have reached a certain maturity in the game, and you have to go from the granules to the bacteria of other players.

Interestingly, Agario was originally a browser game, and was very positively received by the community of players. Later, the creators of the game announced that they would make it technical even more advanced, but this version of the game will not be available in browsers.