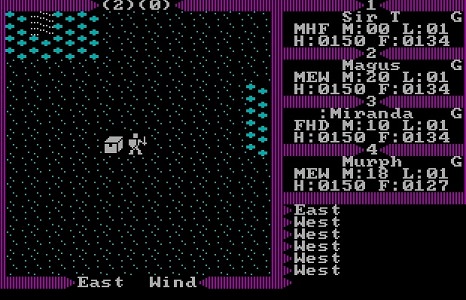 The final events of Ultima 1 — the death of Mondane and the destruction of the Diamond of Immortality, in which the life force of Sosaria itself was concluded — lead to a global cataclysm. Three of the four continents of the planet disappear, leaving in the endless ocean only the Earth of Lord British. In subsequent years, the country is gradually recovering from its troubles, but no one suspects that somewhere far away in the depths of the sea, it cherishes plans to revenge a mysterious creature, the son of Mondane and Minax. His name was Exodus, and from his Island of Fire, rising to the surface of the ocean, he begins to send hordes of monsters to the lands of Lord British. And again, the ruler resorts to foreign intervention, attracting the nameless Hero from Earth to solve the arising problems.

Ultima 3, which became the final of the first trilogy - "Era of Darkness" - in the Ultima storyline, to a large extent defined the gameplay of the subsequent parts of the series. The most important innovation is, of course, the emergence of a “party of adventurers”, three satellites of the Hero, which will help him in the fight against evil. The dreary nights spent by the lonely Hero near the fire surrounded by crowds of unfriendly orcs have gone into the past. Now he has to learn funny gulbishchi in taverns and subsequent drunken raids on the dungeon shoulder to shoulder with true friends. A consequence of the increase in the number of heroes was the change in the combat system. Now, when confronting the adversary, a separate screen opens, on which each of the participants in the battle makes a turn in turn. In addition, it became more difficult to cope with the four characters - everyone has their own wallet, their inventory, everyone wants to eat and pulls the blanket during the rest. The rest of the structure of the gaming space remains the same: the same separate maps for cities and the outside world, plus slightly prettier 3D dungeons.

Ultima 3 was the first game of the young Studio Origin Systems, founded by brothers Robert and Richard Garriot. Coming up with all the care to create the next part of the Ultima series, they got rid of everything superfluous: the space flights disappeared along with the rest of the sci-fi-tinsel, the degree of jokes “for their own” and the general stupidity of what was happening have disappeared; Now we have a typical fantasy setting that takes itself seriously. Numerous classes of characters were added, a complex system of creating heroes, the role of magic strengthened. There are fewer characters that do not carry the plot load, more - interesting places, quests and memorable episodes. And the adventure is accompanied by music authored by Kenneth Arnold. The game came out on the Apple II, C64, Atari 8bit and IBM PC in 1983.

It is somewhat symbolic that the only element of Ultima 3, out of the general style, turned out to be the most important evil thing - starting with the meaningless in the context of the name game and ending with the very fact of its existence. Not only is the nature of the Exodus in the game never revealed, but the narrators are constantly confused in the testimony in the attempts to do this in the subsequent parts - he is a demon, how it is illustrated, in particular, Ultima 6, then the computer, which is hinted at by the need to use punch cards for its destruction in Ultima 3 itself, then a certain hybrid, as the Forge of Virtue addon to the seventh part says.

Ultima 3 is a game in which the “classic” Ultima is a series focused on the plot, the depth of elaboration of the world and immersion in the game atmosphere. The game became a role model for many CRPG developers of the time and had a huge impact on the genre as a whole. It was sold very successfully, it became an excellent launching pad for the work of Origin Systems and gave a start in life to the further creations of Richard Garriott.