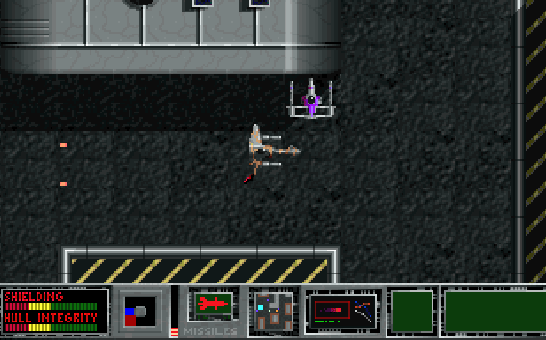 Traffic Department 2192 is a very interesting, unusual, but almost unnoticed game of a difficultly defined genre - a mixture of arcade and RPG.

The action takes place, as the name implies, in 2192, and everything is bad enough: the Earth is enslaved by aliens called Voltures. You play as a pilot girl by the name of Velazquez, Lieutenant of the Transport Department, who is not at all a “transport department”, but an army of resistance to alien invaders. Once upon a time (the Earth was occupied quite a while ago), aliens in front of her eyes killed her father, an officer, who was one of the leaders of the Resistance, so our heroine has enough reasons for personal revenge.

The game has, as it were, two modes: exploration of the territory (of course, with battles) and extensive dialogs with the NPC and the development of the storyline. The view of the game from above, and if you look at it briefly, it seems that in front of us is one of hundreds of “vertical actions”. On foot Velazquez never moves — he just flies low above the ground in a small boat, and fights on it. This is devoted to most of the game, which is really the most arcade game ever. But if we land at some mysterious building and “go in” there, the very ramified (and, for the “arcade”, absolutely shocking) dialogues will begin, from which we can learn more about the plot of the game and about our goals and objectives. And sometimes even with enemies you can talk before the fight! Please note: if you don’t read what is written in the lines of the dialogs, then the game is very likely to NOT pass!

The schedule, no doubt, is worth praising: it is excellent in the main mode (albeit adjusted for the genre). For example, I liked the drawing of various buildings and streets of empty cities most of all. Not a masterpiece, but atmospheric. The portraits of all the characters (especially the main character) shown to us in the dialogs or briefings of the missions can be called beautiful.

The verdict has already been partially delivered above: the game cannot be called something very outstanding, but it clearly does not deserve the obscurity in which it resides. In principle, this is a rare (if not the only) example of an attempt to “reconcile” game lovers of “serious” and “cerebrospinal” games, and although to a full-fledged RPG here, of course, it’s very, very far, and dialogues to the “luminaries” of role-playing games may seem poor, all lovers of not entirely trivial forgotten rarities are still worth playing, the discovery of each of which in our time is a real miracle.