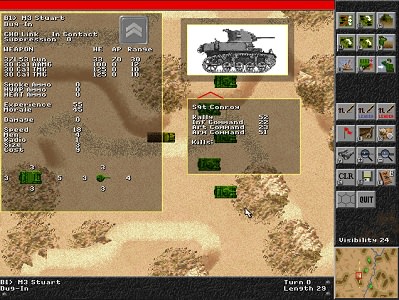 Here you can play the Dos game Steel Panthers in browser.

You occupy the post of commander of a battalion-regiment level (depending on how many units you want to recruit) of the army of 1 of the 15 countries participating in this war; The 16th “country” is the well-known US Marine Corps, the US Marine Corps are tough guys who never surrender (in the game). You can choose historical campaigns (tasks from real battles in Europe, Asia and the Pacific), long campaigns (hypothetical tasks on a randomly generated map, but taking into account time and the enemy, for example, in the Russian campaign in 1939-1940 you have to fight with the Finns, and in 1941-1945 - with the Germans), individual battles, as well as an editor that allows you to create your own maps for battles (but not for campaigns); campaigns are available only for troops of 5 major countries and the USMC, separate battles are for all countries. Here it is necessary to indicate one, but annoying minus: you are in the game ... it seems not, as well as your closest assistants. That is, it is indicated, for example, that a squad of 8 people is commanded by Sergeant Petrov (and he himself is present on the map as an individual), but there are already no platoon, company and higher commanders - there are only their names and data (which, however, are improving, like their subordinates). So you, excuse me, are a virtual commander.

Choosing an army, then a campaign or a separate battle and accepting the “front 100 grams” (vodka, whiskey, schnapps or sake - depending on who you will play for), you form your part from the soldiers and equipment available to this country at this time - these will be your permanent troops, which you will lead in each battle: they gain experience (or lose it during the death of the entire unit), and in between battles they can improve their equipment or recover losses due to the points gained for the victory - the only one can say the “resource” in ig e. In addition to these main units, before each battle you can collect auxiliary, as well as various useful things like minefields and anti-tank guns (all this is for only one battle).

Each unit (Unit) is: 1 unit of infantry or 1 unit of any equipment (including amphibious), or 1 gun (mortar, machine gun, PTR). Aircraft and ships can only be in auxiliary units (there are no ships on the map at all - they fire “out of nowhere”, and you cannot hit them).

Each unit has 2 main indicators: Experience and morale - the higher they are, the better they fight and more accurately shoot, regardless of their materiel (the “green” tank crew can only make 1 shot per move, yes and then from a place, and the experienced one can drive a significant path and shoot 4-5 times); if the unit was moving, then this turn it will be able to make fewer shots. In addition, they have their own weapons, from rifles and grenades to tanks and guns. This weapon operates as expected: you can't even armor an armor from a machine gun, but at once you will cut out an entire squad of infantry, a high-explosive shell will not penetrate a side armor of a tank, and a cumulative one will pierce it like paper.

The commanders of all levels have 4 indicators: Inf, Art, Arm Command (the skill of commanding respectively infantry, artillery and tanks - each commander has one of them is much better developed than the rest, and only you personally own everything equally) and Rally (skill. .. uh ... to restore the combat effectiveness of their units, which can often take to flight without even suffering losses - from close hits and explosions). In addition to the basic data, the commanders and their units also have many additional, less important (the presence of radio communications, etc.) When a unit commander dies (an infantry platoon commander dies when his first unit is destroyed, a tank commander - the first tank, and so on), all subordinates are promoted - and after the battle and in rank - by chain, and a new and completely new one is appointed to the lowest position inexperienced. Conclusion: it is necessary to protect both soldiers and commanders, if only for their own benefit.

As already mentioned, the hostilities are taking place and look very realistic: artillery bombardment, diving planes, burning tanks, wrecked cars, trenches and smoking funnels, destroyed houses - all this was done very efficiently, and soon you get used to the unusual first view from above. Of course, the graphics here are not stunning, but simply normal, and in such games it is not the main thing. The control interface is somewhat inconvenient in that it is located in 2 menus, between which you need to constantly switch, but in general it is very simple. Everything on the battlefield is 100% destructible and damaged: infantrymen and artillerymen die (there are no wounded - the authors of the game are left out), tanks lose track and weapons from well-aimed hits, and when they are destroyed, surviving tankers are chosen, houses collapsing from explosions or entering them tank (sometimes burying it under the rubble), the forests burn. The victory is won by the party that has captured (or held) most of the tactically important positions (Victory Hex).