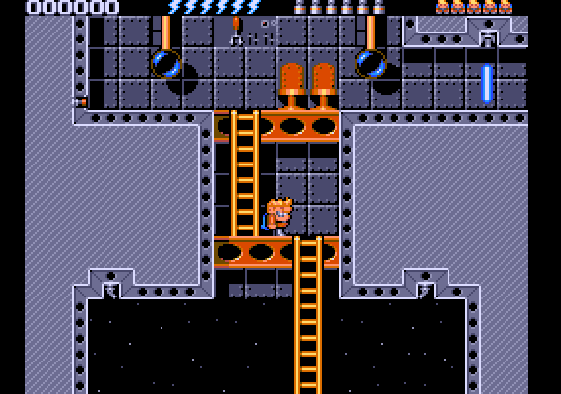 Rick Dangerous 2 is the second and final part of the exploits of Rick’s Dangerous’s - a traveler and just an adventurer. Graphically looking much better than the first part, it, in my opinion, turned out to be slightly weaker in the plot and gameplay terms.

The plot has departed from adventures “in the spirit of Indiana Jones” and has become more commonplace for games of the genre: we need to stop the villain nicknamed Fat Man, who entered into a conspiracy with aliens who dream of enslaving the Earth.

The gameplay is more an arcade than a quest, as in the first part, but the riddles have become even less true, however, you still need to move different levers - this is often vital for moving around the game. Levels and screens are, on the contrary, more diverse: we have to visit the forest, mines, ice caves and other interesting places. Weapons - laser (yes, now like that) a gun or bombs (there are initially six bombs, a bomb can be moved to a certain point), you can also fight with your hands. It is also worth noting the variety and fun of enemies - from robots to penguins. Traps, too, have not disappeared, are still unintuitive to detect and extremely dangerous, and sometimes unexpected (such as lasers in the walls).

The graphics, as already mentioned, have improved - everything has become brighter and clearer. The protagonist’s model has changed - now he is much more like a parody of Superman than Indiana Jones. Whether it is good or not is up to the player. As for the difficulty of passing, it seems to me that it has slightly decreased compared to the first game, but it still remains very high, and many screens will have to go through many times. The verdict is a classic, like the first part, a great continuation of a great game, but I personally like the first part all the same a little more.