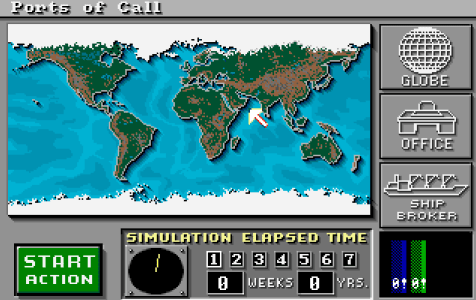 In fact, “local scale” means that here you do not need (or rather, you cannot) create any “trade empire”, everything is much simpler and more complicated at the same time: you are the shipowner and the captain of a single merchant ship. You can not even count on more: you would cope with this (although in the future, if everything goes well, you can buy other vessels). Our occupation here is not the purchase and sale of goods, but simply the transportation of goods for money. Yes, one more important point - the game takes place in OUR days (well, to be honest, it’s not quite ours - judging by the courts, this is the 50s or even the 30s, but anyway - there is no romance anymore ...) .

Before the start of the game, you need to choose your hometown, buy a vessel and start a hard labor activity in recruiting a team, loading goods, delivering them to their destination and so on. The most interesting point is that the ship over time (and the time it sometimes flows very, very quickly) wears out, so a large part of the money earned (and you earn little in this game, even with the most successful hands, not much - such a game) new parts of the ship, but if you do not, then you can one day not be a trite day to go to the bottom. You may also encounter various non-trivial situations: for example, the need to save shipwrecked people.

The unusual surroundings and gameplay more than compensate for some of the poverty of the graphics (precisely in terms of what we see on the screens, and not in terms of the palette) and distinguish this game from the masses of outwardly similar ones. However, lovers of "traditional" maritime trading strategies may not be all to their liking.

By the way, the name Ports of Call arose, of course, not by chance, because the main part of the game begins exactly at those moments when / if the player takes control and manually - that is, without the attraction of port tugs - takes the ship out of the port of departure or leads to the quay wall at the port of destination (requires a certain skill). It is implemented as follows: on the port plan-scheme, within the water area, a schematic ship- “pencil” maneuvers, the movement of which is regulated by means of two sliders (the course - forward / backward, the direction - left / right), which are on the same “pencil” to the right of the playing field. Purpose: in the allotted time to drive the vessel into the specified (framed) zone, not allowing a collision with the coast / port facilities. How would such a Lunar Lander-type, top view.

Tugs, however, are always at your service (for a fee). Consider only: in general, the Ports of Call is not a boatmaster’s simulator, but rather a shipowner, so the possibilities to steer beyond the borders of the ports are quite a bit. You will watch the flag crawling on the world map - from port A to port B - without your participation. Although occasionally the game and throws up all sorts of random little things.

As for the business simulator, the player as a shipowner can buy / sell ships, bunker and repair them, conclude conditional contracts for the carriage of goods by sea with conditional charterers, etc. (besides - examine charts, graphs, columns of numbers). This part of the game, let's say, copes with its functions: it dilutes and binds the port action, introduces a role element. It is unlikely that there was anything more in the plans, nothing more in the end and failed.

In general, Ports of Call is an unfading “arcade” with bolted-on for reviving the details of a business simulator. Perhaps humor and a little - in reasonable doses - visual cartoony would help smooth out the roughness, but Ports of Call does not want to seem toy-like and makes yourself look serious enough, in a business-like manner. Playing it, by the way, is really not that easy. Well, thematically - quite a unique game.