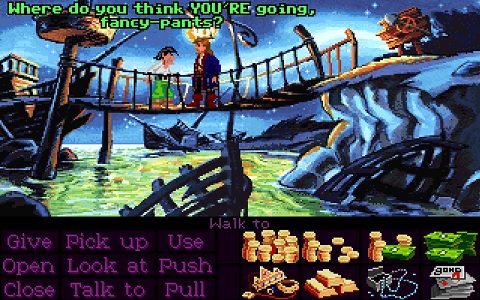 Meet - a masterpiece, part two! I know that sounds like a curse word. Nowadays, you are no longer surprised when you find two awkwardly glued, fresh hand-made articles, designed to make a little more money on the promoted brand, under the wrapper. However, in this particular case, this is not a hack-work, and not even the third leg of the masterpiece, but namely “Masterpiece, Part Two”!

The plot of the first part of Monkey Island has come to a logical end: the sinister pirate-ghost is down, the beautiful Elaine is saved, the fuzzy Guybrush Threepwood is recognized as a real pirate. Above the horizon, the inscription "And they lived ..." rose pink in curls. Yeah, how not so! The second part dexterously intercepts the narration and hides in the more often Stroup Island (Scabb Island) with a nasty giggle. The dead captain LeChuck has not yet said his word, the thunderstorm of the otherworldly seas is eager to return to the world of the living with retribution! Tremble, Tripwood!

He trembles, what about ... our main character, that very mote in the eye and an anchor in ... uh ... the thigh of the pirate ghost, with outrageous carelessness continues to dishonor the ranks of sea robbers. He grew a thin beard, got a lot of money with a beautiful blue camisole in addition and now, sulking on importance, for the hundredth time tormenting the ears of friends with a story about how he bare-handed the beard to Captain Lechaku. It would seem, what else do you want? But Guybrush is sure that without a real treasure a pirate is not a pirate. And a simple treasure with trinkets does not suit him, no: the ghost killer swung no less than the legendary “Big whoop” (“Big Noise”), who had already searched for many well-known pirates. Guybrush is determined to find the famous treasure! Stopping on the island of Stroop is just an annoying misunderstanding: he is now chartering a ship, and nothing will delay him already! Is it just that-oh, he is a short one on the bridge ...

And this is how the Gaybrashevs begin, which means our misadventures. Looking ahead, I will say that there will not be many locations available to us, but they are so full of humor, difficult puzzles and unconventional plot twists that the short game will seem only to the most impetuous gamers.

A few words about the mechanics of the game: in general, everything that can be said about the first part applies to the second. High density of humor per unit of time? There is! Banking a player? There is! Great music? There is! Integrity and fascination of the story? There is! Killing absurdity of situations and problem solving? And how! The amusement program includes dressing Guybrash in a ladies' dress, spitting competitions in length, stealing pets with putting them in their inventory - and this is not the strangest thing! Dying in the game is traditionally impossible, or rather ... in two places you can, if you really try, but the story is constructed so that this death becomes another witty joke. “- And then what?”, “- What-what! They killed me, that's what! ”The last, by the way, is the principled position of the creators of the game. Tim Schaifer, the developer of Monkey Island, admitted that he was very annoyed by the hero’s constant death in Sierra quests. “You die whenever you make a mistake. But the easiest for the screenwriter is to kill the main character. ”

The second part presents in moderation: first, the graphics are significantly improved. The locations with the characters and in the first part were of high quality, but LeChuck’s Revenge makes even its predecessor fade. In addition, the game lost inserts with "realistic" portraits of characters, finally settling on the "cartoon" design. In my opinion, this is a plus, attempts at cinematography (especially in 16 colors) were not particularly in harmony with the general atmosphere of the game. Secondly, the interface has become much more convenient: bulky atavisms like “turn on - turn off” have disappeared from the list of commands, and interaction with many objects has been reduced to a single mouse click. The inventory also became clearer - instead of a dry list of items, we now observe their pictures. Thirdly, Monkey Island 2 boasts a lightweight level of difficulty “Lite”, which, you see, is rare for quests. In this mode, cut out the most intricate puzzle. An excellent compromise for those who are slow quest pace or just not enough time for the game. A matter of taste ... for me - too many good jokes were sacrificed to simplicity. Fourthly, iMuse was the first to be tested on this game, which synchronizes music with events on the screen and ensures a smooth transition from one topic to another. It would seem nonsense, but Lucas does not knit brooms: the music here is a really important part of the atmosphere.
Others have not changed much in comparison with the first part (and this is a compliment!), However, it is worth emphasizing that the game does not require compulsory familiarity with the original source. The author of this review went through "The Revenge of LeChaka" earlier than the "Secret of the Monkey Island", and still got a lot of fun.