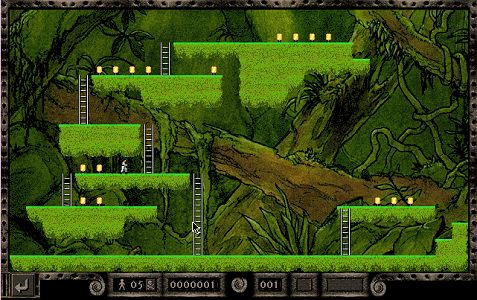 It seems that the Sierra has fully succeeded. The game Lode Runner exists for a very long time, and pleased the owners of Spectrum, Amiga and PC back in the 80s of the last century.

The essence of the game is completely unpretentious: there is a labyrinth, there are chests (with gold?), Set up by some kind assistant assistant farms throughout the labyrinth. The task is to collect all this wealth and break through to the coveted exit. Everything would be simple if it were not for suspicious individuals who are chasing the main character throughout the level. They greatly interfere with the player on the path of enrichment. Compared to the ancient original, several nice innovations have been added to diversify the game. Play - see for yourself. However, the gameplay is not affected by this, but rather the opposite. Definitely one of the best arcades of all time.

The game feels great in any version of Windows.