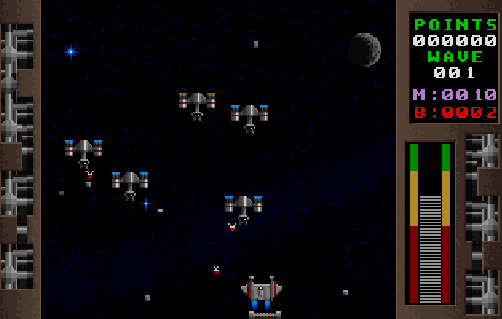 Galactix is ​​a very beautiful space flyer of shareware origin (perhaps one of the best such games in general, which is why it received high marks in the press of that time). The plot is practically absent: the future, it is necessary to save the Earth from the fleet of the alien race Xidus. There is no need to know more.

The gameplay is simply frantically dynamic and does not stop even for a second, since the enemies here are just the sea, and they all come and come. Ammunition is formally endless, but in the form of bonuses you can collect additional limited weapons - bombs, missiles and so on.

The main thing that I would like to note is that it’s simply fantastic for such a game (by the way - later, of course, the game received a full-fledged publication, and it is presented here with us) the level of graphics: you will not only have extremely clear drawing and interesting design of ships and many special effects, but also wonderful drawn inserts in the introduction and in case of winning and losing (you can also see the commander of an alien fleet - in order to understand with whom, in fact, we’re fighting).

In a word - a very good, very complex, but incredibly addictive arcade game, which at the moment, alas, is forgotten, but in the 90s was so popular that it was even reissued under Windows in 1999. The verdict consists of one word: play!