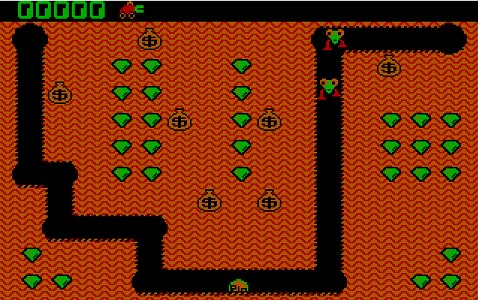 Absolute arcade classics, in fact, do not need a great description. In this game you have to control a digger that digs the ground (which is logical), collects precious stones found in the ground and destroys or avoids enemies.

The main goal at each level is to collect all the emeralds on it, because only then it will be possible to go to the next level, which is naturally more difficult (although it is also desirable to kill all enemies). There are two types of enemies - Nobbins and Hobbins, evil underground creatures, the latter moving much faster than the first (usually at the level of just four monsters, but believe me, this is more than enough). Hobbins are usually obtained over time from Nobbins, but after a while they return to their original state. Enemies can pursue our car only through tunnels dug in the ground by them - they themselves do not know how to dig.

Destroy enemies in two ways. The first is to shoot at them (with the F1 button), but you have to remember that a machine can only fire one at a specific time (it takes about thirty seconds to recharge), and only in the direction that it is now turned “before”. The second way is to dig up the ground around the sacks of gold, so that they fall down and crush the enemies (the right moment, so that they are right under the bag; being below them). In addition, the game can collect rare bonus-cherries (their appearance depends on the number of monsters that you have already managed to kill at this level), thanks to which our car can temporarily become invisible to enemies.

After receiving twenty thousand points on each level, you are given an extra life. It should be noted that the really increasing complexity of the game as you progress through the levels (monsters of both types move faster, Hobbins exist longer than at lower levels, reloading a shot takes more time, bonuses, on the contrary, less time, etc.) and simply the highest on those times AI monsters who strive to surround the player, acting in fact as a team.

The graphics (at least for 1983) are positively remarkable, colorful, bright, and incredibly pleasing to the eye with the beauty of the picture. Do not play this game at least once in your life - it means very seriously depriving yourself culturally, no matter how pathetic it may sound. To say something else is meaningless - it's just a classic.