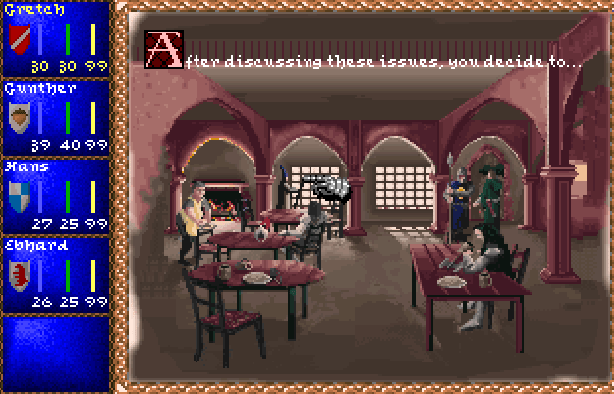 Darklands is realy cool RPG. You will not drink genius. Even if only a few enthusiasts work on the game, this will not stop them from doing something incredible. And this game is another proof of that.

Middle Ages. But this is not a fantasy world, as we used to see it. This is the world of medieval Europe. The system of estates, about a hundred cities that really existed at that time, an excellent combat system ... But at the same time, elements of fantasy are present, only they are very well hidden. There are kobolds, dragons, undead, demons and gnomes. But they lurked in the deepest dungeons, where impenetrable darkness always reigns. The place of habitual magicians is occupied by alchemists. Now you need to rent a room in the tavern, purchase recipes and ingredients, and allow the alchemist to conjure his bottles for several days. And then, in the midst of the battle, give him a simple order ... So there were only charred carcasses left. Why not a fireball? There are a lot of such recipes, and sometimes the same recipe is found in slightly different variations ... Particularly complicated recipes even require a philosopher's stone, prayers uttered by certain saints and their blessings.

There are also familiar spells of priests, but they are also very original decorated. There are more than one hundred (!) Really existing saints, each is responsible for his "profile". You must know Latin in order to participate in masses, to do righteous deeds, to earn the gratitude of the church, and agree with the bishop ... But what you get from prayer more than pays for the efforts spent on reaching favor.

And there is also a brilliant character generation system. Races in the game replace the estate. Peasants, merchants, nobles. About a dozen, quite a decent set. There are restrictions on classes available to different classes and age. Let's say you cannot become a twenty-year-old knight, or break into the knights as a peasant. In order to become a knight, you must at least start a squire, then scroll through the course of generation for five years and rise to the “younger knight”, and only then, as an experienced veteran, can you finally start the game as a knight. Age also imposes its limitations. After forty, physical characteristics begin to plummet, so a balance must be struck between experience and age.

The main goal of the game is simply to live it. Of course, there is the main quest, during which you have to destroy the dark cult, spreading throughout Europe like a contagious disease, but after its completion the game does not end and you can continue your journey through this magnificent world. After all, anyway there are so many different side quests in the game ... This is cleaning the mines from kobolds, when you have to take part in the clash between kobolds and gnomes, and the task of killing the robber baron, and searching for missing documents, and just a lot of interesting things.

Just think, I didn’t describe even a tenth of the whole game ... I didn’t talk about fighting witches, and how a demon crawls out from under the altar, about more than a dozen ways to leave the city, about the real features of cities (say, the best weapons are forged in Steyra, and it is historically a city of gunsmiths). By the way, about weapons. The creators decided not to give the weapon digital values, but only to introduce an indicator of quality, which is responsible for all the properties together. This is also a step towards realism, because I doubt that the medieval blacksmith had a 1d8 + 1 label on his sword.

Phew, I still said incredibly little. Anyway, you can still download the game from our website, so you have the opportunity to enjoy this one-of-a-kind game. I think that even the 92-year-old graphics should not confuse you. During the passage, I resorted to the help of the FAQ, and if my memory serves me, I archived it along with the game. I believe that any RPG fan should try this masterpiece, because there simply are no analogues to it.