Batman Returns is a wonderful transference of Tim Burton’s advent Gothic tale. The minus, which turned out to be an unnecessary pseudo-fighting part, did not spoil the overall picture of the game, and given that it was the first and last in the genre of the "quest" about the defender of Gotham, it makes it not too significant. It is recommended to play on cold winter evenings in order to feel the whole atmosphere of the Gothenian streets.

In 1992, the dark knight of all Gotham - Batman returned from the dark bowels of the mind of Tim Burton. A huge stream of film igronization poured into the video game market. But everyone was surpassed by Konami, which managed to release three games for one film, and each of them became a real treasure for its platform. And if on NES and SNES these were bitemaps, then on PC it was a quest !!! On the one hand, this is not surprising - after all, the hits from LucasArts and Sierra rattled in full; but on the other, Batman began to engage not only in scuffle, but also returned to his canonical activity - detective investigations. Put on a bat costume, collect a set of gadgets, start a Batmobile - it's time to return to Gotham City !!!

Plot
The story told in the film repeats here almost literally: a mysterious Penguin appears in the city, aka Oswald Koblepot, abandoned by his parents because of his appearance and picked up by a flock of penguins, plans to become the new mayor of Gotham using the Red Triangle circus to show the failure of the former mayor in the fight against crime. Along the way, Selina Kyle, having survived death (thanks to a flock of cats), finds her new self and becomes Catwoman. During the passage, an ardent fan of the film will pay attention to the presence of several deviations from the script: for example, we will have to meet with the seller of the fish store. Well, what did you want? A detective is a detective, you have to interview people.

Graphics
For the 1992 quest, the visual component is excellent here. Compare it with another adventure hit of those times - Indiana Jones and Fate of Atlantis - and you will understand. The streets of Gotham are empty, dark and mysterious, the feeling that someone is secretly watching you, the wind howls over the roofs, the dim light will lazily fall from the windows of the houses. Sometimes the feeling comes that the main character here is not Batman at all, but the city that he defends. Those familiar with the color schemes of Burton films of those years will not be disappointed.

Gameplay
The gameplay here is divided into several parts. Investigation - We travel around the city on Batmobile in search of evidence. Of course, they will not let you steer - they will only show the car from the inside and will let you select the destination on the map that is displayed on the monitor. Found evidence? Excellent - we are heading to the Batcave to explore the found object using the Batcomputer, which contains a evidence scanner, a database of characters, a disc player and TV. According to the latter, we learn about the events in the city. Well, the last part of the gameplay is, surprisingly, the fight scene. And then the first minus pops up in the game. You will not be allowed to wave your fists on your own - you are only here to choose the gadgets that Bats will use on your opponent.

Sometimes it’s justified - for example, when you use Batball on Strongman from the Red Triangle circus - and sometimes it’s stupid when you have to jam the enemy with the help of the bataranga, which the Dark Knight could handle on its own. Pay attention to the time system: you are given a day to complete certain tasks in the investigation, and several game days to complete the game. The travel time will affect the ending, of which, according to the good old tradition of Konami, several.

Control
You are a human being - a bat, and also a detective, so the developers think the same way. Take the mouse in your right hand and perform the actions that are standard for any quest.

Music
As soon as the game begins, the developers from Spirit of Discovery let us know that they reacted with awe to the original, as on the start screen, Danny Elfman’s gloomy motives start to caress us. I note that in no other game we will not hear music from the film - here it will be with us from beginning to end. And even if it is not in CD-audio format, but without it there was no sensation of that dark, oppressive Gothic atmosphere. This is the case when the music perfectly matches the tone of the narrative itself. Of course, it is unfortunate that the game never got a CD release - it would only go for a plus and increase its atmosphere. 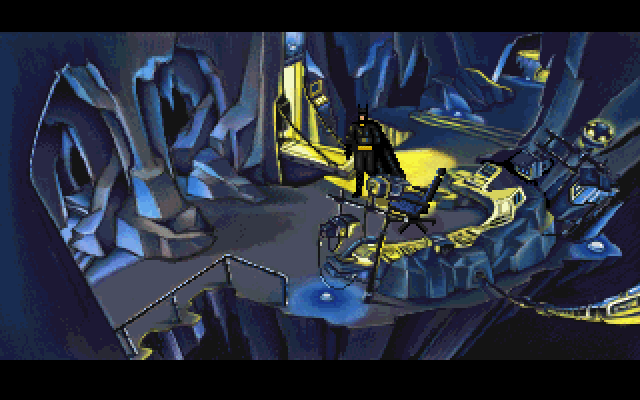